Westboro Baptist Church are at it again

Colossians 4:5 (ESV) Walk in wisdom toward outsiders, making the best use of the time. Let your speech always be gracious, seasoned with salt, so that you may know how you ought to answer each person. 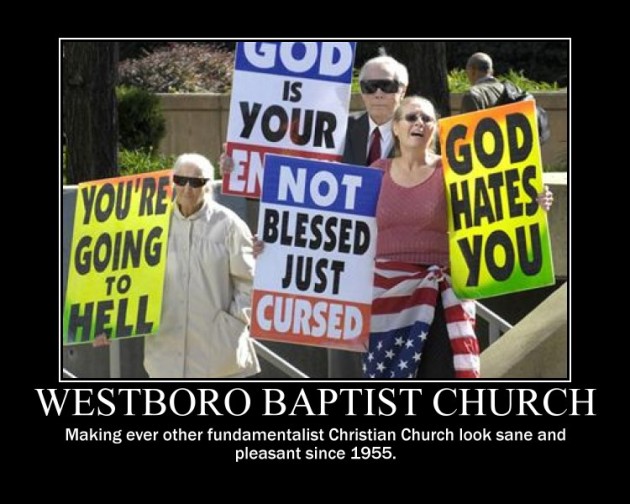 Regular readers to my blog will observe that yesterday I spoke of the need to pray for the family and friends of  Robin Williams,  the actor who committed suicide on Monday.

One controversial group who calls itself a Christian church does not agree. I am of course talking about the Westboro Baptist Church.

I am not one to bash fellow believers in the LORD, however I do have a hard time with these guys. I do agree that we are supposed to be willing to share the truth about our beliefs with the world,  we are commanded to be “salt” and “light”, but I do wonder if they are achieving much for the kingdom of God with their tactics.

The reason they wish to do so is that Williams played a gay man in the movie “The Birdcage” and also for the cross dressing scenes in “Mrs Doubtfire” where he dresses up as a nanny to enable him to see his kids during a messy divorce.

For those of you who are new to Westboro,  I would urge that you do not take my word for it and do a quick search engine site search on four simple words “Westboro Baptist Church protest” and you will see that the church and it’s followers are one issue radicals who march up and down the country (and sometimes go international) to spread a message that “God hates gay people” and “God hates the military”.

As most of you know, I live in Central California in an area that is very patriotic, mostly Republican voters who have an almost country style of living.  The church threatened they would picket two separate military funerals in my area,  I wandered over to see if there was anything that could be said to them, they chose not to come to the one I attended due to local community and local Sheriffs support for the family.

Here is my deal, by all means stand against the sins of this world, but picketing funerals who are packed with people who are already hurting and are not in a place to receive any message, far less a controversial one like the one you are peddling really helps no one.  Yes it gets your name in the media, perhaps that is the aim after all.

If that is the aim then Jesus addressed this when talking to the Pharisee guys who wanted to proclaim Gods name and Gods truth in public and on the street corners where they could be seen by many as “they already have their reward” which basically means that you are doing it vainly or for yourself and their is no eternal or heavenly value in what you are doing.

You do not have to believe me on this one, a quick Web search on the WBC (I do not wish to directly link to their website) will take you to their website (Even the domain name is inflammatory) where they celebrate such things as “soldiers that God has killed in Iraq and Afghanistan, pickets conducted by WBC,  cities that have been visited by WBC, weeks that WBC has held daily pickets on the mean streets of doomed america, people whom God has cast into hell since you loaded this page, gallons of oil that God poured in the Gulf, national debt of doomed america, people that God saved in the flood, people that God killed in the flood, Jews that will be saved in these last days and lastly nanoseconds of sleep that WBC members lose over your opinions and feeeeellllliiiiiings.” These guys are truly displaying the love of Jesus huh?

Let me correct some faulty doctrine here, God is love, God does not hate homosexuals,  military people or anyone. God hates sin however and should we choose to let our time on this earth expire and not choose to reconcile with God, then we will be apart from him forever. Take this from a guy who has most likely never met you, however has made it his life’s goal to tell you that Jesus loves you, so much that he died for you,  so you can be reconciled to God,  Nothing more, nothing less, we are the ones with a choice to make,  we can choose eternal life or not.

People who read this who are fans, family and friends of Robin Williams,  my hope is that Robin took Jesus as his Saviour prior to death, because really not much else matters beyond that. The fame, the Oscar,  the many awards, he can’t take with him and his eternal destination has already been decided, you on the other hand can still choose.

God bless you and I hope this is a blessing,  please prayerfully consider liking, sharing or commenting on the article.
TGBTG
TTE